In the past three decades, there has been a growing interest relating to the approach of non-operative management (NOM) in blunt abdominal trauma, so we deal with spleen and liver primarily, but also kidneys and other organs. Non-operative is a definition that actually means non-surgical; in fact, along with observation, it comprises percutaneous, endoscopic, and often endovascular procedures, so the implementation of embolization has been taken into consideration.

Talking about LIVER INJURIES, for example, after performing a CT scan to have an overview of the situation of the patient, we proceed to act on both active and non-active bleeding (e.g. a pseudoaneurysm or a fistula). 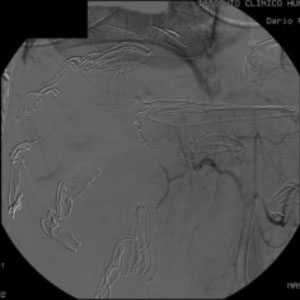 44yo male involved in motorvehicle crash Laparotomy at arrival in first ER, liver packing, w/o control of bleeding. Referred to our hospital for ANGIO Tear of peripheral branch or right hepatic artery. Treated by coiling (2005)

So, at the time I used coils, but with with a vastly diffuse vasospasm and intense active bleeding it took me 10-12 minutes to achieve control. Would I use glue today? 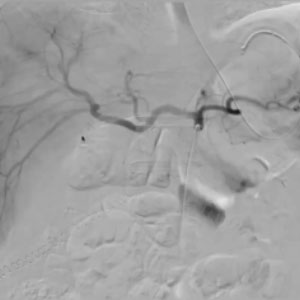 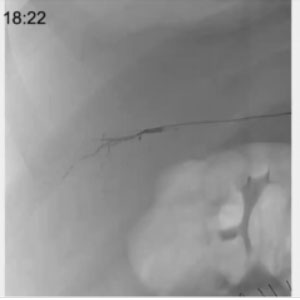 In this case, I used glue, which took me about 2 minutes, so the procedure was much quicker. Additionally, the patient was under anticoagulation and the glue works regardless of the coagulation profile of the patient. This is a very interesting issue as, sometimes, the bleeding is in fact due to the anticoagulation itself. So, we have a product that not only is extremely rapid and effective but also does not revascularize. To answer a previous question, sometimes gelfoam is not ideal: it takes time and does not ensure stability.

The SPLEEN is not a setting where embolization has been used extensively. Proximal embolization is the accepted way but, when stopping the bleeding takes time, we can use the glue within the coils. We need to be extremely careful, though, as the following case reports will show. These are not specifically trauma cases, but they will nonetheless elucidate what I am trying to say. 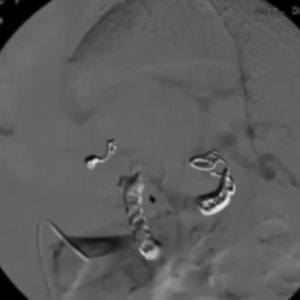 In this case, although I used several coils, the bleeding would not stop. I did not want to use too many coils, what I used glue instead, injecting it inside the coil, which completely blocked the flow with no filling of the aneurysm. This is the kind of result we want to achieve. 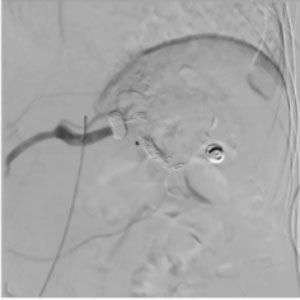 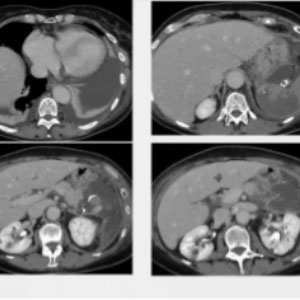 In this case, we had two aneurysms, close to what I interpreted to be a gastric vessel. I opted for a sandwich coiling technique and applied multiple coils: proximal, distal, and in between. I needed to make sure there would be no flow from any other vessel so I injected some glue which, while perfectly sealing the coils that I had targeted, unexpectedly migrated to reach the tiny vessel, which turned out to be not gastric but a pancreatic anomalous vessel. Consequences were unfortunate, as our patient developed necrotizing pancreatitis and took a while to recover. The point that I am trying to make here is that glue indeed works very effectively, but it does not eliminate mistakes, so we need to be very careful during the diagnostic phase before we proceed to the embolization. 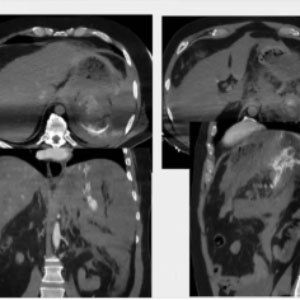 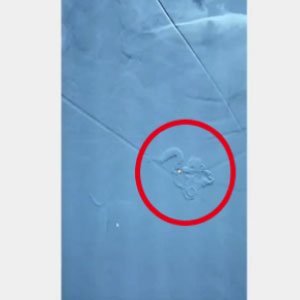 The patient arrived at our hospital with a large hematoma and a very slow flow. We reached the artery beyond the bleeding spot and used coils first, then glue. The glue here not only is blocking the arteries but also navigating the bleeding site. What we want to achieve is distribution both inside and outside of the artery. This is a very unfortunate case, that nonetheless proves that glue indeed performs as expected. The patient died due to the prolonged state of shock, but in the pathologist report we read as follows: “splenic artery filled with hard polymorphous material occupying mid-portion of the vessel and apparently piercing the artery wall and occupying roughly two centimeters of perivascular space”. What this means is that the glue hardens and stays in place, doing exactly the job we need it to do.

In trauma settings we also take care of HIP TRAUMA, cooperating with surgeons and traumatologists. In some cases, embolization can play an even more important role when dealing with focal fractures. 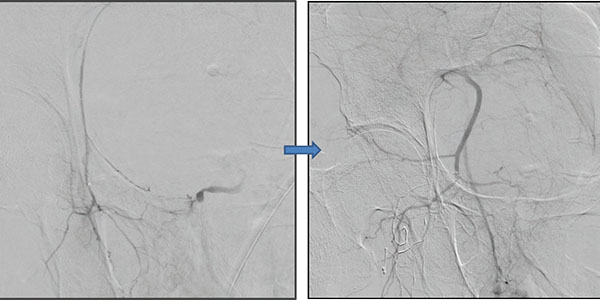 CT scan reveals bleeding close to the fracture site and, through the angiography, we identify a tiny vessel going to the bleeding spot. I could not reach that tiny vessel so, what I did was getting close to it by slowly injecting diluted glue to freeze all the vessels around the spot, to prevent any possible revascularization. Coils might have left an opening to collaterals and revascularization, and that is why we like to use glue in cases like this. 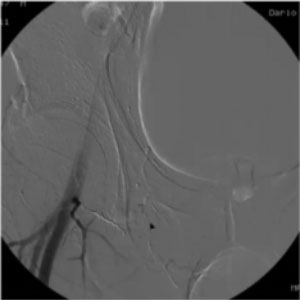 This patient had undergone a cardiological procedure and, once again, we used coils to reduce the flow and then froze the area with diluted glue. 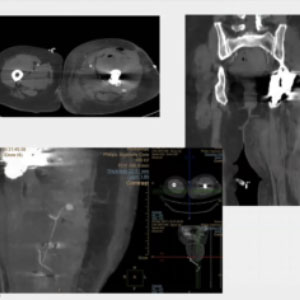 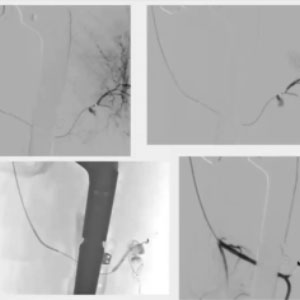 78yo female pt. Hip surgery 4 days before. Progressive shock and Hg drop. CT scan reveals large hematoma w PSA at left thigh. Treatment: glue filling plus coiling to protect distal branch. This patient had undergone a cardiological procedure and, once again, we used coils to reduce the flow and then froze the area with diluted glue.

In this case we identified two vessels going out of the injured site, and I wanted to preserve at least the largest. I used coils first and then injected the glue. In this case the coils have been used to prevent devascularization in the peripheral area and there was space left for the glue to fill up the pseudoaneurysm. The injection can be very gentle and slow because there is no risk for the micro-catheter to get stuck with the glue. I injected a continuous flow and left the catheter in place, waiting for the polymerization to complete. This takes about 10 to 15 seconds, and it is necessary if you want the glue to harden properly, to avoid any unexpected migration. The final result was a perfectly sealed artery, with preservation of the surrounding vessels.

In the past few years, there has been a lot of discussion about BLEEDING IN ANTICOAGULATED PATIENTS WITH MINOR TRAUMA. We have been working on an algorithm to lead our decision-making. 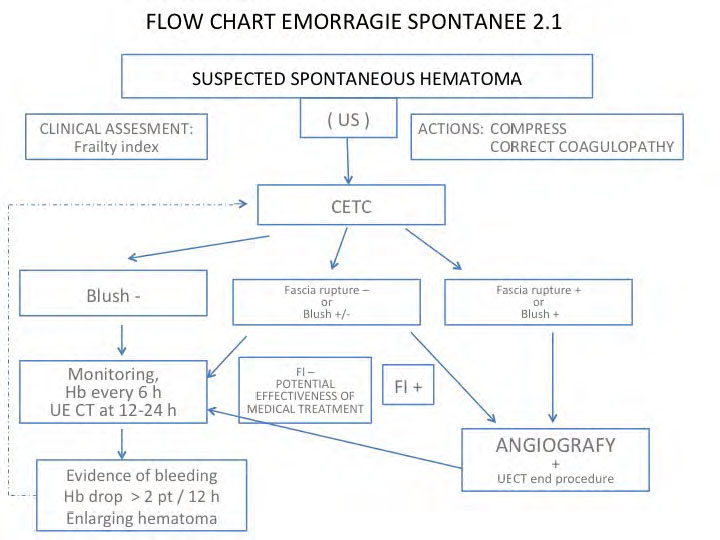 We opt for embolization in case of fascia rupture and active blush. Depending on the amount of blush and on patient frailty, we decide whether to proceed with monitoring or angiography and embolization. 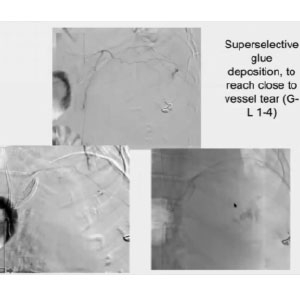 We detected multiple bleeding sites on the left side and I knew I had to go in the lumbar arteries. I injected a mixture of Lipiodol and Glubran®2 with a 4:1 ratio. I closed the first vessel and flushed the micro-catheter with dextrose: in this way, I was able to use the same catheter 3 times. Before carrying on with the embolization, I checked a vessel that I thought could be spinal, and only proceeded when I made sure it was safe. I closed all the vessels and the end result was satisfactory but, two days later, the patient came back with a new bleeding site below the diaphragm. Because I had used glue, rather then gelfoam, I was sure the vessels that I had closed could not have opened up again. It had to be a new one, so I started looking until I found a phrenic vessel that I closed with the same mixture.

Webinar Chat: In the case of the splenic artery, if you had used coils rather than glue, how many would you have needed?

Dario Poretti, MD: Well, it depends on their length but, although we use Glubran®2 to reduce the number of coils, I think you have to base your decision on the speed of the flow, rather than on the amount of metal: if you achieve about 50% of flow reduction but the bleeding is still occurring, you know you are losing precious minutes and wearing out the vessels so, use a high concentration of glue mixture, 1:1 or maybe 1:2, and a small amount within the nest of coils is enough to stop the bleeding. It is very effective.

Vittorio Pedicini MD: You do have alternative tools for muscular bleeding, like particles for example. Due to the aggregation phenomenon, though, you might have an angiogram that shows ceased bleeding but, in fact, you later risk recanalization and further bleeding because of systolic push. This is a risk that you eliminate by using glue.